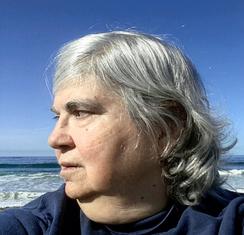 Barbara Ruth is a poet, essayist, photographer, and fiction writer living in San Jose, CA. She is in a long-term relationship which brings her much happiness and as a radical feminist, she is also a marriage resister.

Her work often embraces contradictions, and can be found in Elohi Gadugi Journal, Bop Dead City, Loveliest Magazine, Fragments of Chiaroscuro, Barking Sycamores, and many other anthologies.

She turns seventy in June. The first draft of the poem now titled, "At Twenty-three" was written in 1969.

I was attacked on the bus.

My husband says I should stay in the house.

A gang rules the fire escape of our apartment building.


I have dysmenorrhea if I don’t take "the Pill."

My neurologist says I shouldn’t take "the Pill."

He gave me Sansert and it stopped my migraines.

It also caused a blood clot in my radial artery.


My neurologist says I should have another EEG.

My mother told me to mind my Doctor.

I try not to tell Mom

the worst of it.